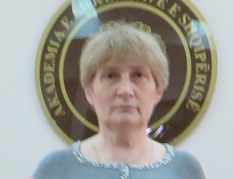 « I can’t believe in the middle of Europe in the 21st century seniors are suffering from starvation! » Galina Poliakova

A real war has been unleashed in the East of Ukraine. It has changed our lives. We are involved now in a range of previously unthinkable activities. Here are a few examples: 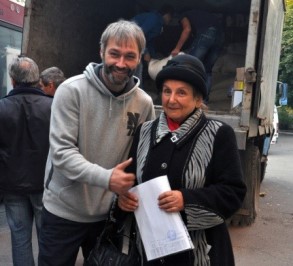 Brave driver, Andrey and Maria Filatova of the Gorlivka branch of League of Nazi victims

A few weeks ago we received an e-mail message from a group of WW2 veterans living in Alchevsk – a city in the territory occupied by terrorists. They told us that there was shortage of food in the city. Many lonely and frail older people, often with restricted mobility, were starving for 3-4 days. We urgently contacted our partner – German Federal Fund EVZ – to request approval for re-allocating our budget to purchase food. The permission was immediately given and we bought 5 tons of food. However, it was impossible to deliver the cargo to the occupied territory by normal means. We had to find a solution. So we pooled our resources and set out to find some volunteers – real daredevils – to do the job. And we did. They delivered the food to Alchevsk.

News travels fast and very shortly after delivering the food, we had a telephone call from Gorlivka, another city in the occupied territory. The members of the Ukrainian League of Former Nazi Victims asked us of some food and medicines. We bought 4 tons of food and medicines. However our volunteers refused to go to Gorlivka, because it was too dangerous. Once again, we were confronted by what seemed to be an insurmountable obstacle and then we found an opportunity. We found a way by which the cargo could be delivered to the front-line where a vehicle from Gorlivka would collect the food and take it to the town. The idea was brilliant. But on the eve of the planned departure, the bus that was to carry the food was confiscated by the terrorists. Back to square one. The volunteers searched and found another jalopy. We all helped to fix it. The food and medicines were finally delivered to Gorlivka. 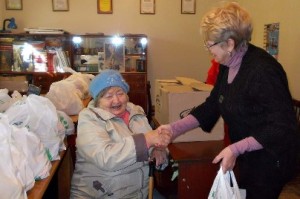 A grateful thank you from a resident in Alchevsk

These are just two episodes. I shall not describe the process of evacuating seniors with mental problems from local residential care units. No comments. As local people told us, Russian convoys (each consisting of 800 trucks!) only brought fuel for tanks, ammunition, weapon and food for the troops.

What a nightmare! I can’t believe that this is now our reality.

When people ask us what they can do, we always give the same answer, please send money. It is the easiest to handle and enables us to buy what is needed.

I wish you all peace!

Nov. 4, 2014: We have just received a new message from Galina: “Yesterday I had a very happy piece of news: the French Embassy is ready to give us 8000 € ($9,995) for food; a week ago we received 6 500 € ($8,120) from the WJR Fund in London and it seems that we shall have another grant to support elder people in the zone occupied by terrorists, this one from the French Caritas. We hope to start the action in November.”

——–
Letter from Ermira Pirdeni, Executive Director of ASAG – Albanian Society for All Ages:

Dear Galina,
This is the second shocking e-mail I receive from you. I feel so powerless. But the Words are singularly the most powerful force available to humanity. I can choose to use this force with words of encouragement, because sometimes courage is the little voice at the end of the day that says I’ll try again tomorrow. I know you’re a woman full of courage and strength! Congratulations for loving your actions! We need to hear the wonderful words of an older woman, Mother Teresa: If we have no peace, it is because we have forgotten that we belong to each other.

——-
*Age Concern Ukraine is a NGO fostering mutual- and self-help for elder people. It runs branches in 10 of the country’s 24 administrative provinces and over 2000 volunteers… that was until Crimea was lost to Russia earlier this year. It was created in 1999 on initiative of the WHO and with moral, methodological and practical support of Age Concern England (UK) and the Community FUND (UK).  www.tlu.org.ua, email: poliakova-tlu@i.ua