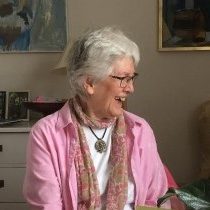 How it started and where we are now. A personal description. Jan. 2018.

I am an American living in Sweden and do not have old friends from school days – or even family of origin – in this country.

Some years ago I began wondering what it might be like to close my private practice as a psychotherapist and consultant. I did not have a work place with colleagues to keep in touch with – so there was a real danger that I might find myself quite solitary.

At about age 77 – in 2015 – it felt right to end the work chapter of my life and begin something new. One difficulty was that I really enjoyed my work and would miss many of  the people who consulted with me.

A few therapists had come regularly for discussions of their work for more than 10 years. And I found it hard to imagine not meeting them again – we had become friends and I enjoyed their company.

A year later, at a final meeting for coffee one afternoon I suggested that we form a group along the lines of something I had recently heard on the internet. The Pass It on Network had been presented by Jan and Moira at a Transforming Aging Summit and I had contacted Moira for a video follow-up. This was quite inspiring and I wanted to continue in some way – this seemed the perfect opportunity to begin.

My friends – both at least five years younger than myself – agreed, and we began then and there to think of who we would like to invite into a monthly Living Aging women’s group.  The next three women we contacted also liked the idea. We had our first meeting in May 2015. The first six members suggested a few others and by October there were ten of us. I was ready to invite even more women since I was expecting several to leave after trying it out.

A group decision was made to stop at ten –  a few felt that even this was too many  – but others asked that we give it a try. The reason was that in case one person couldn’t make it to a meeting she would not need to feel badly about letting the group down – we would not be dependent on every one showing up every month. This has turned out to be a very good decision.

As an older friend and former teacher I easily slipped into the role of facilitator.

At first we met in my home – though just getting ready for 9 other women to come in for coffee and cake with all the practical preparation involved – was rather tiring. But it was wonderful when everyone invited wanted to come and then decided to continue. So far no one has left the group. We now range in age from 91 to 69. I would say that we have fun together – even though our lives are far from easy – actually very complicated to say the least.
I had facilitated groups before and had an idea of what I hoped to aim at. Strong influences were Quaker meetings and Mutuality groups – with agenda (sharing what is going on for each person in her life right now), structure (using a timer to keep sharing and feedback equal for each), and support (greenlighting who and how you are right now – no matter what).

I read the notes on Calling a Circle by Christine Baldwin and Ann Linnea from peerspirit.com and the excellent book Conscious Living, Conscious Aging by Ron Pevny.

Since many of the members had some experience of meditation I felt at ease asking that we sit silently for about five minutes before beginning each meeting. In this quiet time we also include those who cannot be there in person. There is a lit candle in the center of the table and a glass of water for each person.

I explained my ideas about structure – time sharing and reflections – with  a 45 minute break for coffee and small talk in the middle – and asked for help with timing and leading the group.  I also asked that each one bring a sandwich for herself to eat during the break. Various members bring homemade cake or cookies as a surprise once in a while. We move from living room to kitchen for the coffee break – change of scene seems to influence the conversations.

The group convenes once a month at 1 until 4 pm in the afternoon. A few times we have had extra meetings in between and we are now considering doing so again. There is so much that we would like to share with each other – thoughts on books, films, our families – and now, even group policy. All this is part of the very lively discussions during coffee break.

Many are willing to help lead the group but may arrive totally worn out, perhaps because of caring for an ill or much older partner day and night for weeks, or maybe because of personal health issues. So I have continued to facilitate while others help with the timing. And now that we meet most often at someone else’s home, I can use my energy to help facilitate the group. All seem to appreciate this solution and several have now volunteered to lead the group.

It takes some time – many months perhaps – for people in a new group to begin to trust each other and to feel safe enough to share deeply personal thoughts and feelings. However, already at the first meeting someone said ‘it is such a relief to be able to say out loud how I feel without having to think of how it impacts my partner or family’. And someone else replied ‘I could never say most of this to my ordinary social group of friends’.

This has been an evolving process and after about one year the sharing became more personal. Now – more than two years into the group’s life, both vulnerability and caring love is apparent. We cry together and we laugh together – as well as being witnesses to each other’s current situation and ongoing life challenges. We have come to care deeply about one another. And we gain many perspectives through our sharing – I often feel that I am participating in many different lives this way – on the level of peers and good friends.

Sometimes we agree on a general theme for the meeting – such as Dying.   During the years we have read some books together – such as Being Mortal: Medicine and What Matters in the End by Atul Gawande. Several of us have read The Real Alzheimer’: A Guide For Caregivers That Tells It Like It Is by Suzanne Giesemann. These books  have helped a few of us get started with difficult end- of- life talks in our families – as well as the writing of wills.  It was at this point that we had a few extra meetings in between the monthly ones.

Usually we begin with the 5 minute silence and a three word check-in. The three words we speak is a way to help each of us land in the present moment and in the group. We may find a word that describes how we feel in our body, one for our emotions and one for our over-all feeling. The words need not be related or even referred to again during the sharing . One might say – ‘step-by-step’, another  – ‘heavy, tired, hopeful’.  Or, as at our last meeting ‘chaos, chaos, chaos’. Sometimes a few extra words are uttered. As in ‘So happy just to be here’.  After each person speaks we pause and take a breath before turning to the next member.

If we would rather not speak we just say ‘pass’. We then divide the time so that half of the group gets to share before coffee and half after. Sometimes there are only five or six people present and then we get longer sharing time. After the three word check-in we ask who might like to share first.

Most women are eager to share personal experience for about five minutes – plus receiving five minutes of reflection from the others. After this we have one minute for just ‘holding’  the speaker in loving attention. So we can get about 11 min each. There is never much time for discussing general group policy. Especially not if all 10 are present.

We have begun to pause also after each share, and before the reflections in order to prepare to speak thoughtfully. Until now we had guidelines about not criticizing or giving advice – but spontaneous outbursts of sympathy or horror could also occur. One member suggested that we try being silent for a minute before offering a reflection – and the positive change was dramatic. As the main facilitator I am registering things like this in detail – and happy when someone else suggests a change in protocol. I also notice when someone seems to ‘space out’ or slumps in her chair – and I often ask ‘could you hear that?’ The answer is almost always ‘no’.  And then I ask the speaker to repeat – or I repeat the words myself.

Recently I have requested that we all actively engage in discussing our guidelines. So for instance, instead of just nodding when asked if we all accept the principle of confidentiality, I asked each one to give her own thoughts on this. It has been an interesting discussion as we have found that we had different expectations about what confidentiality really means for each of us.

Some choose never to mention who is in the group to anyone else. Others do not mention what was said in the group even to members who were absent during one meeting. We have now talked about how much to say to others in the group when they may have missed one or more meetings and want to know how others are doing and what was said.

We have agreed to let other members know how someone else is getting along in general – perhaps she needs help of some kind or just a telephone call. We may also mention what the general theme of the meeting was – but we do not speak of anyone’s personal sharing.

And we are writing the guidelines down. So that they are our own Swedish WOW guidelines. These discussions are another reason for suggesting extra meetings in between our regular monthly sessions.

Next we may look at how to give supportive feedback or reflections – and perhaps we will talk about why ‘giving advice’ is most often not a good idea.

I have sent out notes on what kind of guidelines a Mutuality/Sharing group may have, and we have printed out the Swedish version of Calling a Circle to use as reference material in drawing up our own guidelines. I am hoping that this will help our WOW become an even stronger, more vital, supportive group of friends.

WOW is not a therapy group, although it clearly can function as a place for exploration, healing, vulnerability and friendship. We are growing more daring about what we allow ourselves to think, remember, express and experience in the moment – and this feels quite exciting and invigorating. And it takes courage.

Having a group of warm and welcoming friends to cheer us on as we go forward in Living Aging is a gift we treasure.

Everyone in WOW has read and approved the text above and has agreed that it may be shared with you via Pass It On Network.